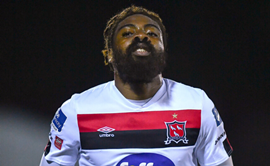 Tottenham Hotspur product Nathan Oduwa will undergo a late fitness test ahead of Dundalk's Europa League meeting with Arsenal at the Emirates Stadium on Thursday night, allnigeriasoccer.com reports.
The former Nigeria U23 international was in Dundalk's traveling squad to the English capital on Wednesday despite concerns over his fitness.
Oduwa has been battling to overcome a hamstring problem and was not involved in Dundalk's last two matches in the League Of Ireland Premier Division.
The 24-year-old was spotted training with his teammates at the Emirates Stadium in his team's final workout yesterday, indicating that he could be involved in some capacity today against the Gunners.
He has three appearances under his belt in European competitions with two coming in the colours of NK Olimpija Ljubljana in 2017 and the other in this season's UEFA Champions League qualifying.
Given Oduwa's Tottenham Hotspur background, he will be the cynosure of all eyes should he take to the pitch.
Igho Kingsley
Photo Credit : dundalkfc.com
Copyright ANS