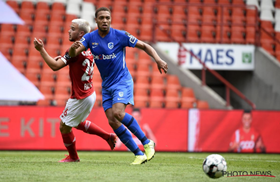 Cyriel Dessers has insisted that he can play alongside Paul Onuachu in attack in the wake of Racing Genk's 4-0 demolition of KAS Eupen in the Belgian First Division A on Friday.
Genk's Danish manager Jess Thorup handed Dessers his first start in the league since August 30, 2020 when he went the distance in the 2-1 defeat to the champions Club Brugge.
And the Super Eagles striker repaid his manager's faith by doubling Genk's advantage with a right-footed shot three minutes into the second half, assisted by his compatriot and strike partner Onuachu.
Before this fixture, the 25-year-old had not scored from open play, with his two strikes coming from the spot in matches with Zulte Waregem and Beerschot V.A.
"From the day I stepped in here, Paul already clicked," says Dessers to HLN.
"It doesn't feel like we are competitors. I think we can also offer a lot together on the field. His goal in Zulte Waregem came after I won a duel and today it was the other way around. That seems like a good recipe. "
Onuachu, the leading scorer in the division, took his tally in the league to nine goals after opening the scoring against Eupen.
Igho Kingsley
Photo Credit : krcgenk.be
Copyright ANS