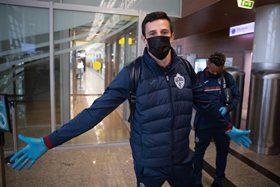 Nigeria have been handed an injury boost ahead of their 2021 Africa Cup of Nations qualifying matches with Sierra Leone next month, allnigeriasoccer.com reports.
CSKA Moscow winger Chidera Ejuke suffered a muscle-related injury in the goalless draw with Dinamo Zagreb two days ago but he has recovered in time to be named in the traveling squad that flew to Volgograd on Saturday afternoon.
The former SC Heerenveen man could be involved in some capacity against Rotor Volgograd tomorrow.
The 22-year-old has made nine appearances in all competitions since his move to CSKA in August.
While Ejuke remains in the frame to link up with the Nigeria squad on November 9, the same cannot be said for Lugano goalkeeper Sebastian Osigwe who has contracted coronavirus and must self-isolate for a minimum of ten days.
Fitness-wise, Ahmed Musa is not one hundred percent as he has not played much this season following his release by Al Nassr.
Gernot Rohr's men take on Sierra Leone at the Samuel Ogbemudia Stadium in Benin City on November 13, starting from 1700 hours before facing the same opponents at the Siaka Stevens Stadium in Freetown four days later.
Ifeanyi Emmanuel
Photo Credit : pfc-cska.com
Copyright ANS