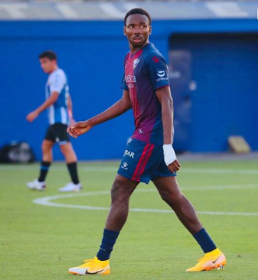 Former Arsenal midfielder Kelechi Nwakali took to social media to celebrate being handed his full La Liga debut during SD Huesca's 4-1 defeat to Real Madrid on Saturday afternoon.
The 2015 U17 World Cup winner hadn't started a league game for the Azulgranas since the last day of the 2019-2020 campaign when he went the distance against Sporting Gijon.
His full debut in La Liga would have come earlier but manager Míchel was careful not to rush him after the midfielder fully recovered from coronavirus.
Nwakali was one of the most impressive players when the game started but fizzled out in the second half and was replaced in the 57th minute.
A sensational strike from Eden Hazard, a Karim Benzema brace and Fede Valverde's effort condemned Huesca to their third loss of the season but their second in two games.
Nwakali is confident that the Huesca side have the ability to perform better in subsequent matches.
The number 26 wrote on Instagram : "Positive over what we can do better #realmadrid #huesca".
Nwakali departed Arsenal in the summer transfer window of 2019 without playing a single game for the first team because he couldn't sort out his papers.
Ifeanyi Emmanuel
Copyright ANS