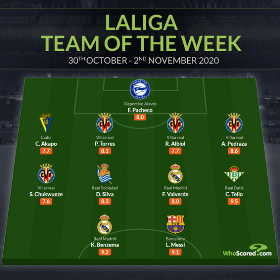 Samuel Chukwueze has been named in the Spanish La Liga Team of the Week by football statistics website Whoscored following the conclusion of the matchday eight fixtures.
The Nigeria international was rewarded with a spot after opening his account for the season in Villarreal's 2-0 home win against Real Valladolid CF at La Cerámica on Monday night.
Villarreal dominate the best XI with four of their players making the cut followed by Real Madrid with two while Barcelona, Real Sociedad, Deportivo Alaves, Cadiz and Real Betis have contributed one player each.
In a 4-4-2 formation, Barcelona's Lionel Messi and Real Madrid's Karim Benzema have been named in attack with Chukwueze playing behind the duo in a right midfield role.
Against Real Valladolid, the Super Eagles star had a pass success rate of 84.6 percent, made a joint-game high 2 key passes, had one shot on target which ended up in the back of the net, completed one dribble and won one free-kick for his team.
Chuwkueze also had 43 touches and successfully pulled off one interception in addition to one clearance.
The 21-year-old was rated 7.6 out of ten for his performance.
Ifeanyi Emmanuel
Copyright ANS