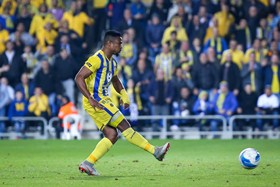 Nigerian striker Chikeluba Ofoedu is demanding 250,000 euros (approximately N133.8 million) for the rest of the 2019-2020 season to join Israeli Premier League side Bnei Yehuda, according to reports in Israel.
One.co.il says Bnei Yehuda are in the market for a foreign striker to complete their roster and are in talks with Ofoedu.
The former Enugu Rangers star claims he has another offer from an unnamed club in Egypt that would see him pocket 250,000 euros in his first season and 300,000 euros the following season.
But Ofoedu's priority is to return to Israel after enjoying his stay with Maccabi Tel Aviv, for whom he scored 16 goals in 56 games and helped to win back-to-back Premier League titles.
To make up the salary gap, Bnei Yehuda are considering offering him performance-related bonuses and option to extend his contract.
The 27-year-old ended last season prematurely, in February 2020,  after suffering a thigh muscle rupture.
He played for Eskisehirspor, Samsunspor, Karsiyaka and 1461 Trabzon prior to his move to Maccabi Tel Aviv in 2018.
Ifeanyi Emmanuel
Copyright ANS