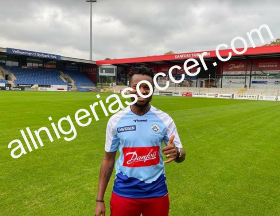 Danish Superliga table-toppers SonderjyskE have taken to social media to congratulate Super Eagles star Eddy Onazi on being the fourth Nigerian player to feature for the club.
Last month, the former Lazio and Trabzonspor midfielder ended his search for a new club by signing a contract with SonderjyskE for the rest of the current season with an option for an extension of two more seasons.
When Onazi joined SonderjyskE, he was lacking match fitness, so wasn't involved in back-to-back matches against Bröndby IF and Randers but featured for the reserve team against Vejle BK Res on October 19 in a bid to step up his fitness.
He was handed his debut in Monday's 1-1 draw with Aarhus GF, coming off the bench to replace Anders Jacobsen in the 88th minute - his first competitive match since taking to the field vs Trabzonspor on July 13, 2020.
"Congratulations to Ogenyi Onazi, who made his debut for SønderjyskE Monday evening 👏," SonderjyskE said in a Facebook post.
"Onazi is the fourth Nigerian in the light blue shirt - the other three are Rilwan Hassan, Adigun Salami and Rabiu Afolabi 👕🇳🇬."
Rilwan Hassan has totaled 34 appearances for SønderjyskE since joining them from FC Midtjylland, while Afolabi and  Salami appeared in five and three matches respectively during their time with the club.
Igho Kingsley
Copyright ANS