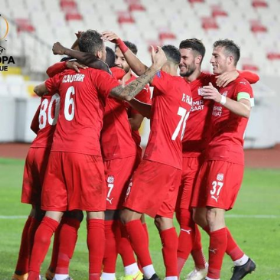 Turkish side Sivasspor picked up their first win in Group I of the Europa League on Thursday evening, beating Qarabag 2-0 at the Yeni 4 Eylül Stadyumu - Sivas, allnigeriasoccer.com reports.
Sivasspor were desperate to bounce back following defeats to Villarreal and Maccabi Tel Aviv, and Caner Osmanpasa got them on their way when he opened the scoring eleven minutes in.
Just before the hour mark, Shakhtar Donetsk loanee Olarenwaju Kayode came off the bench to replace Mustapha Yatabare.
Two minutes before time, the Nigeria international scored a vital second goal for the home team, bravely lifting the ball over the advancing Magomedaliyev to score after meeting a first time pass over the top from Hakan Arslan.
In the process, Kayode netted in his third straight match in the Europa League.
The former Golden Eaglets and Flying Eagles star found the net against Villarreal before making it two in two games against Maccabi Tel Aviv last Thursday.
Kayode has not played for the Super Eagles since his cameo appearance in a pre-World Cup friendly against Argentina in November 2017.
Igho Kingsley
Photo Credit : sivasspor.org.tr