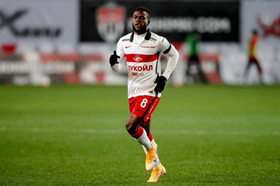 Spartak Moscow coach Domenico Tedesco has revealed that referee Pavel Kukuyan threatened to send off Victor Moses during his side's 2-2 draw with Ural at the Ekaterinburg Arena on Saturday afternoon.
The former Nigeria international has yet to go the distance in his four appearances for the Red and Whites as he was replaced at half-time in today's clash.
Moses was walking a disciplinary tightrope after he was shown a yellow card in the 34th minute.
Aleksandr Sobolev confidently dispatched a spot kick in first half stoppage time to give Spartak Moscow a 2-1 lead, the penalty was awarded after the Chelsea loanee was fouled in the area.
Speaking at the post-match press conference, Tedesco explained his thinking behind substituting Moses at half-time.
He was quoted as saying by Championat.com : "Victor got a yellow very quickly, it's up to you whether it's fair or not. Then the referee warned that any next foul is sending off, was forced to replace.
"He played well, earned a penalty. Physically not ready for 100, we are really looking forward to the winter training camp to raise the bar for physical readiness of Moses, Kokorin and Urunov, who has already received his third injury".
Spartak Moscow have an obligation to buy Moses at season's end if they qualify for the UEFA Champions League and the winger plays the required number of games.
Ifeanyi Emmanuel
Photo Credit : spartak.com
Copyright ANS