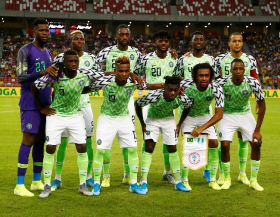 Super Eagles coach Gernot Rohr has revealed that the players invited to the national team for the 2021 Africa Cup of Nations qualifying matches with Sierra Leone are facing traveling difficulties due to a new lockdown in some European countries.
The German football tactician is hoping to have the full complement of 23 players called up by Tuesday, November 10.
The Nigeria Football Federation informed the invited players to report for international duty latest Monday, November 9 but the target date is not feasible with as many as fourteen players involved in club duties today.
The players affected are Daniel Akpeyi, Leon Balogun, Joe Aribo, Jamilu Collins, Semi Ajayi, Zaidu Sanusi, Kevin Akpoguma, Oghenekaro Etebo, Frank Onyeka, Emmanuel Dennis, Samuel Chukwueze, Victor Osimhen, Kelechi Iheanacho and Chidera Ejuke.
Pressed to provide an update on his squad, Rohr said to the Super Eagles Media Team : "The update today is that our 23 players are fit, there are some traveling problems because they cancelled one or two flights, because you know in Europe now it's another lockdown in certain countries and it's not easy to find the flights but our team manager is working on it with the traveling agency.

"I hope that all the twenty three players will be here at least on Monday.

"Some of them are playing on Sunday, traveling on Monday to Abuja then to Lagos, they can only arrive on Tuesday, so really only two days of preparations.

"It's Wednesday and Thursday in good conditions and I hope the grass will be okay in Benin City, I see that it's a new stadium but the most important for the players is to have a good grass and then to see a good football game.

"We want to give joy to Nigerians in this very special period and we want to be happy with a good win next Friday".
FC Lugano goalkeeper Sebastian Osigwe has tested negative for COVID-19 and made the matchday squad against FC Lausanne Sport on Saturday, and as a result he's back in contention to play a cap-tying game for the Super Eagles.
Of the 24 players originally named on the roster, CD Leganes center back Kenneth Omeruo is unavailable due to fitness issues while injured Nantes winger Moses Simon has been replaced by Paul Onuachu.
Ifeanyi Emmanuel
Copyright ANS