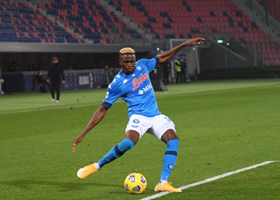 Super Eagles striker Victor Osimhen was back on the scoresheet and it was a crucial goal which helped Napoli secure all three points in a 1-0 road win against Bologna on Sunday evening, allnigeriasoccer.com reports.
Midway through the first half, Mexico winger Hirving Lozano sent in an inviting cross which was met Osimhen who managed to keep his header down and finished well.
It was the Nigeria international's first ever headed goal in the league for a European top five league club.
Last season, Osimhen netted 13 goals in 27 appearances for Lille in the French Ligue 1 without a single header hitting the back of the net.
The only header he managed to score during his time with Lille came against Chelsea in the group stage of the UEFA Champions League.
Osimhen opened his goalscoring account in the Italian Serie A against Atalanta on October 17, scoring via a right-footed shot from just outside the area.
Against Bologna, Senegal defender Kalidou Koulibaly thought he had doubled Napoli's lead but the goal was disallowed after a VAR check because Osimhen used his hand in the buildup as he attempted an acrobatic effort.
The 21-year-old is expected to report for international duty as from Monday ahead of Nigeria's 2021 Africa Cup of Nations qualifying matches with Sierra Leone in Benin City and Freetown.
Igho Kingsley
Photo Credit : sscnapoli.it
Copyright ANS