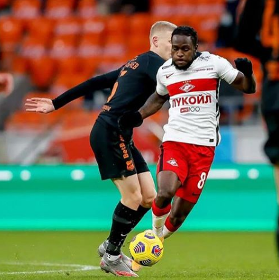 Chelsea-owned winger Victor Moses has revealed that he was disappointed with Spartak Moscow's 2-2 draw with Ural in their latest game in the Russian Premier League.
The former Nigeria international won the penalty converted by Aleksandr Sobolev in first half stoppage time which put the Red and Whites 2-1 up at the break.
But the goal was not enough for Spartak Moscow to secure a win as Ural's Rafal Augustyniak netted an equaliser on the hour mark.
Moses received a yellow card in the 34th minute and had to be replaced by manager Domenico Tedesco at half time to avoid him getting sent off.
Writing on social media Sunday evening, Moses said  : "Gutted not to get the 3 points we deserved yesterday but we will bounce back and come back stronger.
"Thanks to all of our brilliant fans for the support. We will see you after the international break ready to go again".
Moses has been involved in four matches since his arrival at Spartak Moscow in October and has tasted defeat once, while helping the capital outfit win two matches and drawing the other.
Ifeanyi Emmanuel
Photo Credit : spartak.com
Copyright ANS