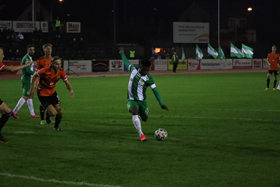 Akinkunmi Amoo sparkled on his full competitive debut for  Hammarby, scoring a brace to propel the Swedish Allsvenskan side to a 5-0 rout of Gute in the second round of the Svenska Cupen on Thursday evening.
Prior to yesterday's game at Gutavallen, the former Golden Eaglets sensation had made four appearances off the bench in the league against Helsingborg, Mjällby, östersund and Varbergs BoIS.
Having missed pre-season training and joined the team late, after the season started, Hammarby coach is gradually introducing him to the first team fold.
Amoo netted his first goal as a professional in the 32nd minute against Gute before wrapping up the scoring in the 71st minute with the fifth goal.
Speaking post-match, the Sidos FC Academy product was happy to score twice and promised to continue working had to break into the starting lineup.
"I am very excited when I found out I'll start the game, I was calm on the pitch not to make any mistakes - to impress my family and the club," Amoo said to Hammarby TV.

"I can still do it if they give me the chance, it is a privilege for me and this is an opportunity for me."
On his two goals, he said : "I'm very happy today because the two goals were amazing".
Amoo was replaced six minutes from time after overworking himself and claims he has not suffered an injury.
"I am really fine now, the work I did today was very hard so that I can impress the fans and the club so I put all my heart and strength so that we can achieve victory and we won the game 5-0, that's a good result for us.

"The second goal was very amazing because I chipped the goalkeeper," he concluded.
Ifeanyi Emmanuel
Copyright ANS