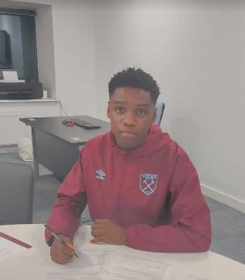 Allnigeriasoccer.com has been told that West Ham have bolstered their academy ranks with the capture of versatile Nigeria-eligible center back Justin Osagie from Southend United.
The Hammers have pulled off a transfer coup with the signing of the talented teenager as he was linked with several Premier League clubs.
Arsenal, Chelsea, Tottenham Hotspur, Liverpool, Wolverhampton Wanderers and Brighton & Hive tried to sign Osagie but he didn't end up joining the clubs because Southend United rejected their approaches.
The Seasiders will be due compensation following his move to West Ham as Osagie came through their academy ranks.
He has been described as a versatile center back who is good on the ball, has good technical ability, reads the game well, has an eye for a pass, quick and is comfortable playing as a central midfielder.
The English Football Association are understood to be keeping tabs on the dual eligible Osagie with a view to a call up to the 2005-born Young Lions team.
He links up with exciting Nigeria-eligible youngsters Mipo Odubeko, Daniel Jinadu, Iyiola Adebayo, Ajibola Alese, and Josh Okocha at the West Ham academy.
Ifeanyi Emmanuel
Copyright ANS