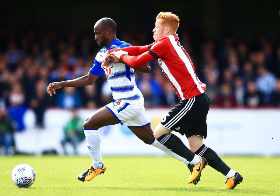 It has been seven years since Reading were last in the Premier League but the start the Berkshire-based club have made to the Championship this season suggests they have a good chance of returning to the top-flight. Nigeria’s Sone Aluko is playing a big role in their early success in the Championship.
The 31-year-old, who has a wealth of experience in the division after spells with Hull City and Fulham, has featured in 10 of their opening 13 matches in all competitions.
The Nigerian has seven caps for his country and he could be set for a recall back into the national team if his strong form continues for the Royals who, at the time of writing, are top of the Championship on 22 points.
Reading have Championship odds of 25/1 to win the title this season and they are 13/2 to be promoted. If they continue to keep the top spot in the standings, those odds are likely to be cut over the next few months.
Aluko is one of a number of forwards who are all vying for a starting spot in Veljko Paunovic’s team.
This healthy competition is helping the club as they are all pushing each other to be at their very best.
Although Aluko’s best tally so far in his career is 12 goals, he offers so much more to the team than just finding the back of the net. He is a forward player who has a lot of attributes which can help Reading in the league.


Change in Fortunes for Royals

The strong start to the campaign by Reading has come as a surprise to many followers of the league.
Over the last three years they have been struggling to keep their status in the second tier of English football with finishing positions of 20th, 20th and 14th respectively.
Paunovic took over from Mark Bowen back in August and that appointment is looking shrewd at this early stage. The former Chicago Fire coach is getting the best from his squad and that is reflected in their results.
The former striker is known for his attacking style of play and he is sure to see Aluko play a big role in the transformation of his team. Paunovic, a Serbian international in his playing days, featured for some of the big clubs in Europe, including Atletico Madrid, so he has a lot of experience in the game.
Aluko, who signed for Reading from Fulham in 2017, failed to flourish under Bowen so this latest managerial change will come as a relief for him.
So far, he looks to have done enough to impress the new Royals boss. He was praised for his performance in his side’s 1-0 victory over Watford last month where he worked extremely hard in that win over one of the best teams in the division.
In what is the final year of his contract at Reading, Aluko may be doing enough to convince the club to give him a deal to remain at Madejski Stadium beyond the 2020/2021 campaign.
Ifeanyi Emmanuel
Photo Credit : readingfc.co.uk