...the complete Nigerian football portal
Subscribe
Eagles Coach Rohr Names The One Player Who Impressed Him The Most Against Sierra Leone
Published: November 17, 2020 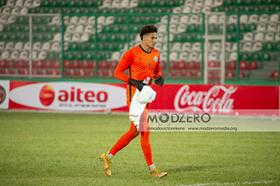 Manager Gernot Rohr has highlighted that Maduka Okoye was the Super Eagles most eye-catching player during their goalless draw with Sierra Leone in a 2021 Africa Cup of Nations qualifier on Tuesday evening.
Fans and pundits alike heavily criticized the Sparta Rotterdam youngster in the wake of the 4-4 draw with the West African opponents last Friday but Rohr has defended the German-born goalkeeper, saying he was not at fault for the goals.
The Franco-German surprised everyone by picking Okoye ahead of the more experienced Daniel Akpeyi and the 21-year-old repaid the trust by keeping his first clean sheet in his fourth start for the national team.
Speaking to reporters post-match, Rohr said : "It's a long, long time that we had a goalless defence and we wanted to be solid after what happened in the second half the other day.

"I am especially very happy for our goalkeeper (Maduka Okoye) who showed to everybody that he is a good one.

"We have a young team, it was a shock the other day after the injury to Victor Osimhen, everybody was afraid, and today they wanted to fight for him, they did it, they fought very well."
Rohr went on to reveal that the Super Eagles are on the brink of qualifying for the 2021 Africa Cup of Nations, having accumulated eight points from four matches.
He continued : "It's not official but we are very close now to qualification, we also saw the result of Benin who played a draw in Lesotho.

"All the games are difficult, there are no little opponents, everybody is well organized, today on this difficult pitch we tried to play football."
Three-time African champions Nigeria will lock horns with neighbors Benin in their next Africa Cup of Nations qualifier in March 2021.
Ifeanyi Emmanuel
Copyright ANS