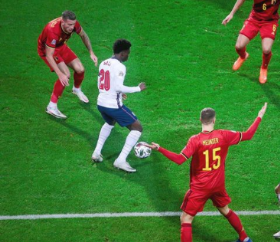 With his appearance today in a UEFA Nations League match between England and Iceland, Arsenal wing-back Bukayo Saka is no longer eligible to represent the Nigerian national teams, allnigeriasoccer.com reports.
The talented teenager now has four matches under his belt for the Three Lions, exceeding the threshold for him to switch nationality to Nigeria in the future.
Under FIFA's new rule on eligibility, it would have been possible for Saka to request for a change of association if he wished assuming he wasn't handed his fourth international cap by Gareth Southgate and wasn't fielded again for the next three years.
The Hale End Academy product would have become cap-tied to England for good when he made his competitive debut against Belgium on November 15, based on the old rules.
The London-born Saka benefited from uncertainty over the fitness of England's first choice left-back Ben Chilwell, with Southgate handing minutes to the Arsenal wonderkid in all the three matches played by the Three Lions in November.
He started against Republic of Ireland, then came on to replace the Chelsea star in the 38th minute vs Belgium, before going the full ninety in today's clash with Iceland.
Saka has followed in the footsteps of Chelsea trio Ross Barkley, Tammy Abraham and Fikayo Tomori, and Tottenham Hotspur's Dele Alli who are permanently tied to the English Football Association despite their Nigerian background.
Ifeanyi Emmanuel
Photo Credit : thefa.com
Copyright ANS