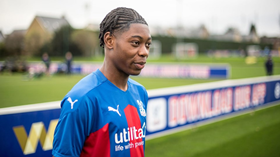 Talented left-back Tayo Adaramola has admitted that Charlton Athletic passed up the opportunity to sign him before he joined Crystal Palace at U12 level.
The Republic of Ireland U17 international of Nigeria descent signed his first professional contract with the Eagles this week, a reward for his outstanding performances for the U16 and U18 teams over the last one year.
Adaramola got into football at the age of four, starting off with a small team in Castleknock before switching to popular Irish club St Kevin's.
The fullback trained with West Ham for several months after relocating to London along with his parents in 2014.
"I didn't have a team for about five months, I was just getting fit myself until I went to trial at Charlton, and then that didn't go so well, so then after that I went to West Ham development for about six months and then I finally came to Palace," Adaramola said to the official website of the Eagles.
On his style of play and how he approaches the game, Adaramola stated : "I play left-back, left wing-back so normally around the left side.
"Personally I think I'm strong, I'm quick and I like 1v1 battles so going forward and defending, so I like to make it a hard day for whoever is on my side."
Adaramola and two other players of Nigerian descent Ademola Ola-Adebomi and Victor Akinwale helped Crystal Palace to win the 2019 national Super Floodlit Cup final for the first time ever.
Igho Kingsley
Photo Credit : cpfc.co.uk
Copyright ANS