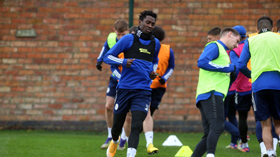 Nigeria international Wilfred Ndidi is seemingly on the road to full recovery after spending two months on the sidelines, allnigeriasoccer.com reports.
The official website of Leicester City posted training pictures showing the holding midfielder training with his teammates on Wednesday as they stepped up their preparations for the visit to Anfield, where they face Liverpool in the Premier League this coming Sunday.
The Nath Boys product aggravated an adductor injury during the Premier League meeting with Burnley on September 20 and later underwent a procedure.
Ndidi continued to play despite feeling pains at the tail end of last season and beginning of the 2020-2021 campaign.
Manager Brendan Rodgers had previously predicted that Ndidi would not be back on the pitch until mid-December as his recovery would take up to twelve weeks of rehabilitation.
The 23-year-old went the distance in the Foxes first two matches of the season but was not available for selection for the next ten in all competitions.
For the first time in five years, Ndidi didn't play a single game for the Super Eagles due to his ailment.
Ifeanyi Emmanuel
Photo Credit : lcfc.com
Copyright ANS