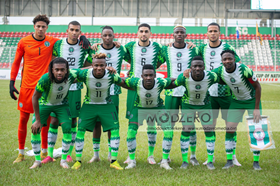 Super Eagles' coach, Gernot Rohr has been put under the microscope with his questionable selections in the two 2021 Africa Cup of Nations qualifying matches played this month.
Nigeria played two matches over the past week and were disappointing in both matches. The Super Eagles drew both matches against a Sierra Leone team that is currently ranked 120th in the world.

The first match between the 2 teams was the most shocking as the 'three-time' Nations Cup winners surrendered a 4-goal lead to the Leone Stars.

One of the talking points of the match was Gernot Rohr playing Akpoguma on the right of defense while having Ola Aina on the bench.

To make matters worse, the gaffer didn't sub off the 25-year old central defender despite it being obvious that he was struggling in the game with the 2nd and 3rd goal coming from his wing.

Akpoguma is naturally a central defender and although he is capable of playing at full-back, he shouldn't be doing that at the expense of players who are natural in that position.

If you had thought that that Rohr played Akpoguma in the first game due to lack of options, then what happened in the second leg would shock you as the German tactician started him again at right-back and used Ola Aina at left-back.

This happened with Zaidu Sanusi and Jamilu Collins on the bench. Although Ola Aina can play on both sides of the defense, it only makes sense that he plays on the right side where he has played all season for his club especially considering that position lacked more options.

With the current crop of players that Nigeria has now, it would be sad if our coach's selection errors cost us trophies in what could turn out to be another 'Golden Generation' for Nigeria.