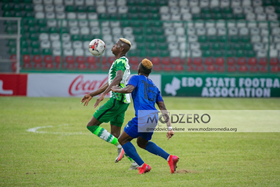 Nigerian Federation president Amaju Pinnick has acknowledged that Victor Osimhen is angry he picked up an injury while on international duty with the Super Eagles last Friday.
The Napoli striker had to make way for Racing Genk's Paul Onuachu in the 78th minute of the 4-4 draw with Sierra Leone and was visibly in pains as he was taken off the pitch.
Napoli and the Super Eagles medical team have both confirmed that he dislocated his shoulder and faces a spell on the sidelines.
"He told me that he already feels much better , he is a fighter, he wants to return to the pitch as soon as possible and give everything for both Napoli and Nigeria," Pinnick told Radio Kiss Kiss, according to Italian sports daily Corriere dello Sport – Stadio.
"He is very keen to make his contribution and improve himself, he wants to achieve the goals he has set"
Osimhen was not available for selection in Nigeria's reverse fixture against the Leone Stars and is rated as a huge doubt for Napoli's upcoming games against AC Milan and Rijeka.
Explaining why Osimhen is angry, Pinnick added : "It is natural that he is: because of this injury he lost the chance to play with the Super Eagles and with the Azzurri until he is healed".
In eight outings for Napoli since his big money move from Lille, Osimhen has scored two goals and provided an assist in 560 minutes of action.
Igho Kingsley
Copyright ANS