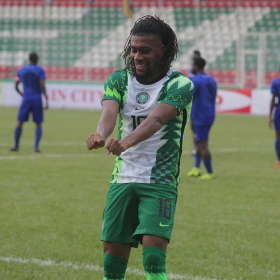 Two days after Nigeria were held to a goalless draw by Sierra Leone in a 2021 Africa Cup of Nations qualifier in Freetown, Super Eagles playmaker Alex Iwobi has taken to social media to break his silence on the disappointing result.
The Everton number 17 went the distance in both qualifiers against the Leone Stars, partnering Oghenekaro Etebo and Joe Aribo in midfield from the start.
Against the West African opponents at the Samuel Ogbemudia Stadium, Iwobi was the shining light when things were going well for the Super Eagles, getting on the scoresheet in the 4th and 27th minute.

His first time strike from 25 yards that sailed into the top corner was arguably the pick of the goals scored by Nigeria in November.
Having been held to a 4-4 draw, the Super Eagles were seeking revenge in Freetown but another poor performance saw them settle for a goalless draw against a country ranked 120th in the FIFA ranking.
Iwobi has taken the positives from the two matches after increasing his tally to nine goals in 44 appearances for the national team, five years after his senior debut.
"Positivity Only 🎉," Iwobi wrote on Instagram, accompanied by a photo of him celebrating one of his goals vs Sierra Leone.
The former Arsenal winger will turn his attention to Everton's next game in the Premier League - a trip to Craven Cottage where they face Ola Aina's Fulham.
Ifeanyi Emmanuel
Copyright ANS