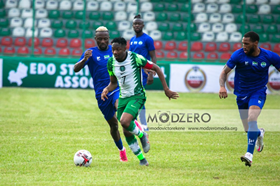 At least five English Premier League clubs have been offered the chance to sign Super Eagles captain Ahmed Musa, according to reports.
Team Talk claims Crystal Palace, Newcastle United, West Ham United, Burnley and Sheffield United have been approached by Musa's agent but it remains to be seen if an offer is made.
The Golden Boot Soccer Academy product was on the books of Leicester City for two years after which he transferred to Al-Nassr after putting himself in the shop window at the 2018 World Cup.
He is currently a free agent after mutually terminating his contract with the Saudi Pro League club last month.
Though Musa is on the radar of clubs in Spain, Russia, Italy and Turkey, he would prefer a move to the Premier League.
Meanwhile, according to Serbian media Srpski Telegraf, it is claimed that Serbian powerhouse Red Star Belgrade are in advanced talks to sign the former Kano Pillars star in the January transfer window.
The 1991 European champions are targeting Musa amid uncertainty over the future of Ghana striker Richmond Boakye.
Ifeanyi Emmanuel
Copyright ANS