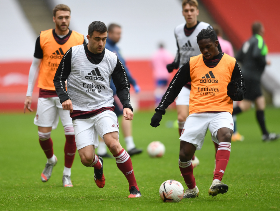 For the first time this season, Arsenal have registered back-to-back wins and clean sheets in the Premier League 2 following their 1-0 victory over Everton at the Emirates Stadium in London on Friday afternoon, allnigeriasoccer.com reports.
Manager Steve Bould handed starts to striker Folarin Balogun and central midfielder Tim Akinola while goalkeeper Arthur Okonkwo returned to the matchday squad but ended up being a non-playing substitute.
Akinola and Balogun were joined in the starting XI by three Arsenal first team stars namely Sokratis Papastathopoulos, Calum Chambers and William Saliba.
The Gunners broke the deadlock as early as the ninth minute when Emile Smith Rowe finished off a delivery from Ben Cottrell after goalkeeper Macey played a pass into midfield.
Miguel Azeez, on as a substitute at half time, was presented with an opportunity to double Arsenal's advantage but fired wide with his left foot at minute 59.
On 62 minutes, Balogun was expelled for the very first time in the Premier League 2 after receiving a second yellow card.
The 19-year-old saw his first yellow in the 52nd minute and ten minutes later he was cautioned again for simulating a foul in the penalty area.
Igho Kingsley
Photo Credit : arsenal.com
Copyright ANS