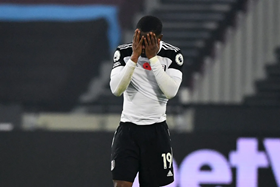 Ademola Lookman has thanked the fans for backing him following his missed Panenka penalty in the closing seconds of Fulham's 1-0 loss to West Ham in their last game before the international break.
The Cottagers were on the brink of snatching a point right at the death, referee Robert Jones awarded them a penalty after reviewing the pitch-side VAR monitor.

Lookman would have become the hero for Fulham but the confident RB Leipzig loanee saw his Panenka penalty easily saved by goalkeeper Lukasz Fabianski.
After the final whistle, Lookman was on the verge of tears but was comforted by his teammates.
Speaking to Fulham's official website, Lookman said : "The fans backed me 100 per cent, and I want to tell them of my appreciation and love for all of the great messages I received.

"I was devastated after the game, but now it’s one of those things that I’ve got to learn from. That’s what I’m going to do, and I’m going to embrace the challenges ahead.

"I’ve used it as motivation, and now I’m just looking ahead to the next challenge".
Lookman is hoping to face his former club Everton in Sunday's Premier League meeting at Craven Cottage.
Igho Kingsley
Photo Credit : fulhamfc.com
Copyright ANS