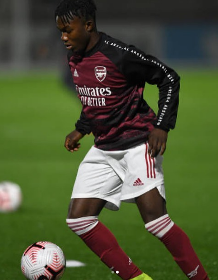 Dutch-born winger of Nigerian descent Joel Ideho made his first start for an Arsenal team on Saturday afternoon, allnigeriasoccer.com reports.
The former Ajax Amsterdam whizkid was named in the starting lineup as Arsenal and Fulham played out a goalless draw in an U18 Premier League fixture.
Before today's contest, the promising youngster was given ten minutes against Blackburn Rovers U23s and was an unused substitute against Liverpool and Gillingham in the Premier League 2 and EFL Trohy respectively.
While Ideho lasted 66 minutes on the pitch, his Arsenal teammates goalkeeper Ovie Ejeheri and center back Zach Awe were in action for 90 and 47 minutes respectively, while Fulham's Michael Olakigbe watched proceedings from the bench for the entirety of the game.
Mazeed Ogungbo, Daniel Oyegoke and Nathan Butler-Oyedeji were not in Arsenal's matchday squad for the London derby.
Following their draw against the Cottagers, Arsenal are sat in seventh in the U18 Premier League having picked up 13 points from eight matches.
Igho Kingsley
Copyright ANS