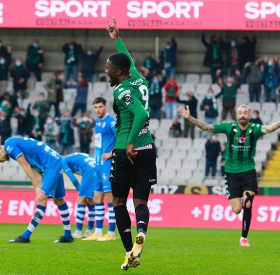 Cercle Brugge returned to winning ways after two defeats in a row by beating Waasland-Beveren 2-0 at Freethielstadion on Saturday evening, allnigeriasoccer.com reports.
Chelsea loanee Ike Ugbo was the architect of the win thanks to his brace, taking his tally for the season to seven goals in the Belgian First Division A.
Two minutes before half time, the former England U17 international showed his predatory instincts to open the scoring and doubled the advantage on 82 minutes.
Following his pair of goals against Waasland-Beveren, Ugbo is now third on the scoring charts behind Racing Genk's Paul Onuachu and Beerschot's Raphael Holzhauser who both have nine goals to their names each.
Ugbo's other goals came against KV Mechelen, Sint-Truiden, KAA Gent (2) and Zulte Waregem.
The 22-year-old spent time on loan at Barnsley, Scunthorpe United and MK Dons in the English Football League before venturing abroad to join Roda JC in the summer of 2019.
Cercle Brugge's three points put them eighth in the provisional standings before their next game with Royal Excel Mouscron on Wednesday, November 25.
Igho Kingsley
Photo Credit : cerclebrugge.be