...the complete Nigerian football portal
Subscribe
Photo : Villarreal Penalty Vs Real Madrid Should Have Been Retaken As Chukwueze Was Inside The Box
Published: November 22, 2020 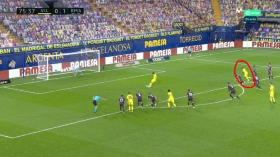 Villarreal's equalising goal against Real Madrid in Saturday evening's La Liga clash at the Estadio de la Cerámica should not have stood as Samuel Chukwueze was inside the box when the kick was taken by Gerard Moreno in the 76th minute, allnigeriasoccer.com reports.
The Nigeria international won a penalty after he was clipped by Real Madrid goalkeeper Thibaut Courtois in the area.
The video assistant referee should have notified the on-field referee, Alejandro Hernandez Hernandez of player encroachment as part of Chukwueze's foot was inside the penalty area while Moreno took his kick.
According to the rules, Moreno would have retaken the kick since he found the net and the referee would have awarded an indirect free-kick to Real Madrid assuming the Villarreal striker missed the kick.
Chukwueze is ten games away from reaching a 100-game milestone for the Yellow Submarine following his appearance off the bench against Los Blancos, two years, two months and one day after making his professional debut.
During that time, the 2015 U17 World Cup winner has registered 13 goals and provided 12 assists.
Ifeanyi Emmanuel
Photo Credit : marca.com
Copyright ANS