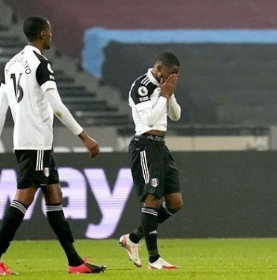 Liverpool legend Steve McManaman has heavily criticized Ademola Lookman for his missed Panenka penalty in the closing seconds of Fulham's 1-0 loss to West Ham in their last game before the international break.
The Super Eagles hopeful was handed penalty taking duties at the expense of Aleksandar Mitrovic only because the Serbian striker was carrying a knock.
Lookman would have become the hero for Fulham but the confident RB Leipzig loanee saw his Paneka penalty easily saved by goalkeeper Lukasz Fabianski and was close to tears after the final whistle.
McManaman has insisted that the 2017 U20 World Cup winner was the architect of his own misfortune and labelled him an arrogant player.
Speaking just before the start of Fulham's clash with Everton, McManaman said on Premier League Productions : "I think anybody who plays this game as a professional footballer knows that this was awful, wasn't it?

"It was arrogance, you're 1-0 down away from home, you're somewhere near the bottom of the league, you've got a penalty with the last kick of the game, you just go and blast it in the back of the net. You do not do that.

"Just go smash it in the net, if you miss or the goalie saves it, fine, but you can't do that and then lie on the floor and shake your head as if it was somebody else's fault".
Against Everton at Craven Cottage this afternoon, Fulham coach Scott Parker has kept faith with Lookman, naming him in the starting lineup along with Tosin Adarabioyo and Ola Aina.
Ifeanyi Emmanuel
Copyright ANS