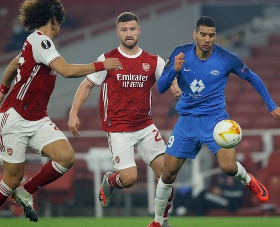 Molde star Ohi Omoijuanfo is back in contention to face Arsenal in Thursday's Europa League meeting at the Aker Stadium.
The Oslo-born striker of Nigerian descent was not in the Molde squad for yesterday's 3-0 win against his former club Stabæk because he was quarantining.
One of his close contacts has a connection to one of the workplaces that were affected by the coronavirus outbreak in Molde last week, Aftenposten reported.
The Norwegian newspaper added that Omoijuanfo returned to the Aker Stadium on Monday to train and is ready for the matchday four clash against the Gunners, having tested negative for coronavirus.
The 26-year-old has been Molde's key player in the Europa League, scoring two goals and has started all their matches.
He faces competition from another Nigerian striker in Leke James to be named in the starting lineup against the Premier League opponents.
The physical striker has scored 7 goals in 22 appearances in the Norwegian Eliteserien this term.
Ifeanyi Emmanuel
Copyright ANS