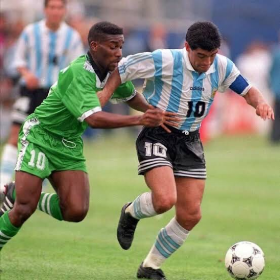 Former Chelsea midfielder John Obi Mikel and Spartak Moscow wing-back Victor Moses have joined the world in mourning the death of legendary Argentina midfielder Diego Maradona.
The Barcelona and Napoli icon passed away on Wednesday morning following cardio-respiratory arrest and the ambulances that went to his home could do nothing to save him.
Maradona was last seen in public on October 30, on his 60th birthday, before the league match between Gimnasia and Patronato and was presented with a commemorative plaque.
Maradona was in the dugout when Argentina battled hard to beat Nigeria 1-0 at the 2010 World Cup, a game Mikel was supposed to have been involved in if not for an injury he suffered at Chelsea in the weeks leading up to the start of the tournament in South Africa.
Moses and his former Chelsea teammate Mikel have taken to Instagram to pen an emotional tribute to the 1986 World Cup winner.
The defensive midfielder said : "Rest in peace 💔 diego maradona #legend🙏🙏🙏".
Sharing his sadness, Moses stated : "RIP Diego Maradona.One of the best ever 😢".
Argentina president, Alberto Fernandez, has declared three days of official mourning following the death of Maradona.
Igho Kingsley
Copyright ANS
All rights reserved. This material, and other digital content on this website, may not be reproduced, published, rewritten or redistributed in whole or in part without prior express written permission from allnigeriasoccer.com