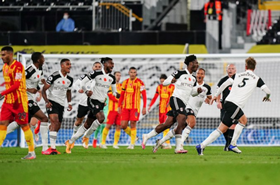 Chelsea Academy product Ola Aina has given three reasons he could not turn down a move to Craven Cottage in the summer transfer window.
The Nigeria international arrived at Fulham on loan from Italian club Torino with an option to buy him permanently at the end of the season included in the deal.
Apart from the Fulham training ground being three minutes from his family home, Aina revealed that he opted to return to the Premier League because he is pals with some players in the Fulham squad and the club have a good history.
The 24-year-old banged in his maiden goal in the Premier League as Fulham registered a 2-0 win over West Brom, scoring with a sensational thunderbolt from just outside the box.
Speaking to Fulham Fix : Episode 14, Aina explained : "Yes definitely a straightforward one for me, one it being so close to the area that I basically live in, two obviously I know some of the players here.

"Obviously I know about the manager and his history in football and three, everyone knows about Fulham so it was just an opportunity that I thought I definitely can't turn down and it would help me a lot in developing as a player"
Aina has started the last seven matches contested by Fulham in all competitions ahead of Monday's visit to the King Power Stadium where they face Kelechi Iheanacho's Leicester City in the Premier League.
Ifeanyi Emmanuel
Photo Credit : fulhamfc.com