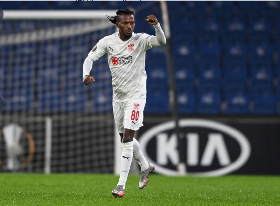 According to the statisticians at OPTA, out-of-favor Super Eagles striker Olarenwaju Kayode has become the first player to score in four consecutive matches in the 2020-2021 Europa League.
The Shakhtar Donetsk loanee initially started the game staged at Başakşehir Fatih Terim Stadyumu - Istanbul on the bench before his introduction in the 57th minute with Sivasspor trailing Qarabag FK 2-1.
Kayode made an immediate impact, scoring with his first touch a minute after his introduction to equalise for his Turkish team.
The former Manchester City star raced to the near post and glanced a header into the far corner following a cross from Yasin öztekin.
In doing so, Kayode took his goal tally in the Europa League to four, having found the net against Villarreal, Maccabi Tel Aviv and Qarabag in the previous rounds.
The tournament record belongs to Romelu Lukaku who scored in eleven consecutive Europa League matches last season.
After four matches in Group I, Sivasspor occupy the third position with six points, behind Villarreal (10 pts) and Maccabi Tel Aviv (7 pts).
Ifeanyi Emmanuel