...the complete Nigerian football portal
Subscribe
'We Have To Be A Bit More Nasty' - Adarabioyo Tells Fulham What They Are Missing
Published: November 28, 2020 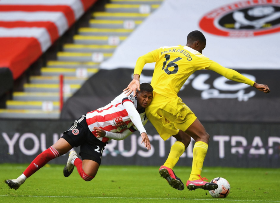 Former Manchester City youth team captain Tosin Adarabioyo dreamt of playing in the English Premier League and has already made five appearances to date for Fulham after cementing his place in the starting lineup.
The Cottagers coached by Scott Parker have not had a good run ahead of their trip to King Power Stadium on Monday, losing seven of their opening nine games in the division and are back in the relegation places.
Of the seven matches lost by the Cottagers, they were beaten by a single-goal margin, against Leeds United, Wolverhampton Wanderers, Crystal Palace, West Ham and Everton.
Adarabioyo believes that Fulham have not been able to potentially turn the couple of narrow defeats into draws or wins because they lack aggression.
On what Fulham are missing, Adarabioyo told Fulham's YouTube page : "I think we just have to be a bit more nasty as a team, and slowly focus on getting the job done.

"I'd rather get the job done than playing poorly, than play well and not get the points that we need.

"We all just know we need to be ruthless defending our goal and getting at the opposition's, we all know that's what we need to do."
Adarabioyo is aware he should not switch off in Monday's evening clash against Leicester City who are deadly on the counter attack and have in their ranks the current Premier League Golden Boot winner in Jamie Vardy.
Igho Kingsley
Photo Credit : fulhamfc.com
Copyright ANS