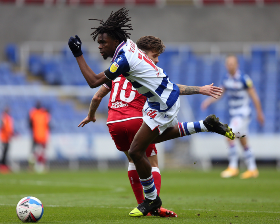 Reading returned to winning ways after five games without a victory by beating Bristol City 3-1 at the Madejski Stadium  on Saturday afternoon, allnigeriasoccer.com reports.
The Royals started the 2020-2021 season in blistering fashion, picking up seven wins from eight but lost their next four games, then drew with Millwall before today's meeting.
2017 England U20 World Cup-winning midfielder Ovie Ejaria got the Royals on their way when he opened the scoring in the 54th minute.
The Super Eagles hopeful scored via a deflected shot from just outside the area after he was picked out by Lucas João and strangely did not celebrate his goal though he was engulfed by his teammates after giving the Royals an important lead.
Ejaria's last goal before today's meeting dates back to September 12, 2020 when he netted in the opening day win at Derby County.
Yakou Meïté restored Reading's one-goal lead in the 76th minute, slotting past goalkeeper Bentley after Michael Olise spotted his run and played a delightful ball with the outside of his left boot to release the number 11.
Reading who are third in the provisional standings return to Championship action on December 2 against Fisayo Dele-Bashiru's Sheffield Wednesday.
Ifeanyi Emmanuel
Photo Credit : readingfc.co.uk
Copyright ANS