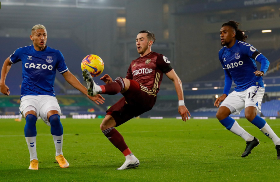 Leeds United defeated Everton at Goodison Park for the first time in the Premier League era on Saturday evening thanks to a late strike from Raphinha.
Manager Carlo Ancelotti had squad problems leading up to this fixture with fullbacks Seamus Coleman and Lucas Digne unavailable for selection through injury.
For the second game in a row, Alex Iwobi was asked to play a role he was not familiar with and the transition from winger to wing-back did not work out well today in contrast to his eye-catching display at Fulham last weekend.
In an intriguing 3-4-3 formation, Iwobi was deployed as a left wing-back but switched to the other flank following the introduction of Fabian Delph as replacement for Davies just past the hour mark.
In a hard-fought first half, the game plan from manager Marcelo Bielsa was to target the spaces behind Iwobi and Davies, something noted by former Bournemouth coach Eddie Howe, who was on punditry duties for Premier League Productions.

Howe said at half time : "I think Everton have a problem in wide areas in this game and I don't think they've really fully dealt with it.

"You've got Iwobi and Davies, and I think they have done really well considering they are out of position but they have had a problem and they haven't dealt with it well.

"Leeds created loads of chances from it."
Ancelotti tried to correct the issue by taking off Iwobi and Davies in the second half but Leeds United managed to secure all three points.
Ifeanyi Emmanuel
Photo Credit : leedsunited.com
Copyright ANS