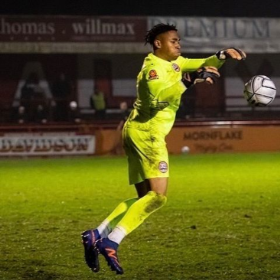 Tottenham Hotspur goalkeeper of Nigerian parentage, Joshua Oluwayemi was handed his first minutes in men's football against Altrincham on Saturday evening, allnigeriasoccer.com reports.
Last month, the north London club loaned him out to National League club Maidenhead United to get valuable first-team experience but he didn't taste action until yesterday.
With Taye Ashby-Hammond in great form, Oluwayemi has found it difficult breaking into the starting lineup and acted as cover for the Fulham loanee in seven consecutive matches since his arrival at The Magpies.
The first choice glovesman sustained an injury in the closing minutes of the first half but managed to complete the half.
Oluwayemi later came on for his debut when the second half started, replacing the injured Ashby-Hammond.
Seventeen minutes later, he picked the ball from his own net after Hancock converted a penalty and was beaten again in the 77th minute, Tom Peers the scorer for the home team.
Before heading to Maidenhead United on loan, Oluwayemi played the last ten minutes of a 3-0 win against West Ham in the Premier League 2.
The 2001-born Anglo-Nigerian goalkeeper is on work experience at the fifth-tier club until January 2021.
Ifeanyi Emmanuel
Photo Credit : instagram.com/jchibzz
Copyright ANS