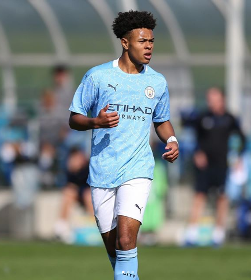 Manchester City beat Sunderland 5-0 in the U18 Premier League on Saturday afternoon with two players of Nigerian descent involved in eighty percent of the goals scored by Carlos Vicens' side at the City Football Academy, allnigeriasoccer.com reports.
While Tai Sodje ended his mini goal drought in style by netting a brace and providing an assist, Adedire scored his first ever goal for Manchester City U18s after coming off the bench.
Sodje, nephew of retired Nigeria national teamers Sam and Efe, had started the season in blistering fashion but fired blanks in his last three games prior to the match against the Black Cats.
The 17-year-old sent Manchester City in at the break in the driving seat when he converted a spot kick and seven minutes into the second half he turned from scorer to provider, setting up the second goal netted by Micah Hamilton.
Thirteen minutes from time, Sodje tapped in at the back post for his second and City's third goal, taking his tally for the season to eight league goals in the process.
On as a substitute in the 70th minute, Mebude wrapped up the scoring when he smashed home from close range in the 84th minute.
Adedire is the younger brother of Dapo Mebude who made his professional debut for Glasgow Rangers first team in May 2019.
Igho Kingsley
Copyright ANS