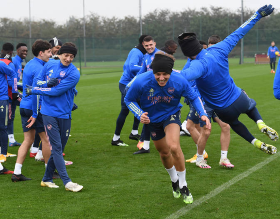 Folarin Balogun,19, was called up by manager Mikel Arteta to train with Arsenal first team on Saturday afternoon, allnigeriasoccer.com reports.
Arsenal have published training pictures of the final workout before the visit of Wolverhampton Wanderers to the Emirates Stadium and the American-born striker of Nigerian descent was spotted training with the first team stars.
In recent weeks, Balogun has been rubbing shoulders with the Gunners first team players both in training and competitive games having featured in the Europa League wins against Dundalk and most recently Molde.
The 19-year-old has been picked in matchday squads for the Europa League and League Cup and it would be the first squad involvement for the England U20 international if he makes the 18 vs Wolves.
Though Balogun was dismissed in his last appearance for Arsenal U23s, he remains eligible to feature for the first team in domestic matches as the suspension is restricted to the competition in which he was red carded.
He found the net thirty seven seconds after his introduction against Molde and with his second touch, his first senior goal for Arsenal's first team.
Ifeanyi Emmanuel
Photo Credit : arsenal.com
Copyright ANS