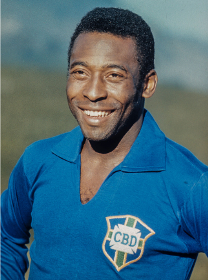 There are just 52 hat-tricks that occurred in all World Cup tournaments with over 800 matches. Wonder who scores those hat-tricks?

In this article, bongdatructuyen names the top 10 best FIFA World Cup hat-trick footballers in history for you.

For those who don’t know, a hat-trick in football occurs when a player hits three goals at only one match. Any footballer that does that will become a national hero.

Even if you're not a big fan of football, you may hear about some names below since they’re way too famous for their achievements, including World Cup hat-tricks! So let’s check it out.

Our list begins with one of the most legendary footballers in history - Pelé.
He was the youngest player ever to make a hat-trick come true in the World Cup tournament.
Representing the Brazils, Pelé fought against France in the 1958 FIFA World Cup semi-final match.

Before 27,000 spectators inside the stadium on that day, this young boy at the age of 17 scored his three amazing goals at the 52nd, 64th, and 75th minute.

Source: Akamaized.net
Opposed to Pele, Ronaldo is the oldest footballer to ever score a hat-trick in a World Cup match.

CR7 saved Portugal’s as he scored a brilliant hat-trick to secure a draw in the match with Spain when the 2018 FIFA World Cups were held.


He kicked off with an early penalty at the 4th minute then followed up by his 2nd goal at the end of the first half when David de Gea made a serious mistake.
And at the 88th minute of the game, his final goal came and made Ronaldo become Portugal’s hero.

Source: Pinimg.com
Geoffrey Hurst could be the greatest football hero of England since his World Cup final’s unforgettable hat-trick delivered England’s one and only World Cup trophy in 1966.

With more than 96,000 spectators watching the final game in 1966, legend footballer Geoff Hurst displayed a glorious performance with 3 goals in total 4 for the England squad.

This breathtaking hat-trick happened at the 18th, 98th, and 120th minute of the match.

Source: Wikimedia.org
In the 1950 FIFA World Cup tournament, over 100,000 people joined the semi-final game between Brazil and Sweden in Rio de Janeiro.

And the host team - Brazil - pleased their homeland spectators with a winning game of unbelievable score: 7-1.


It’s even harder to accept the fact that 4 goals in the total 7 were scored by only one legend man: Ademir.
His sky-rocketed performance at the 12th, 36th, 52nd, and 58th minutes proofed himself to be one of the greatest football players that ever scored a hat-trick in the FIFA World Cup.

Source: Fifa.com
No one could ever feel the same pressure as Paolo Rossi during the 1982 FIFA World Cup.

Being banned from playing professionally for 2 years before the kickoff of the 1982 FIFA World Cup due to a match-fixing scandal, he was expected to fail the game.

Unimaginable, with the determination to prove himself, Rossi played a whole tournament with flying colors.

He was the top goal-scorer of that World Cup tournament with a total of 6 goals. And his epic hat-trick came in the 3-2 victory against the Brazil team.

Source: Fcbayern.com
Gerd Muller is currently considered as the third, leading World Cup goalscorer of all time!
His legendary 2 hat-tricks in just one World Cup makes it hard to achieve by other football players.

His two hat-tricks came in the back-to-back matches with the West Germany national football team at the 1970 World Cup tournament.

One was in the 5-2 victory against Bulgaria. However, his hat-trick in the game with Peru was the one to be all-time remembered.

This led to the glamorous victory of West Germany with the final score of 3-1.

The most marvelous moment happened when Pedro Cea scored his jaw-dropping hat-trick in his homeland.

Pedro Cea’s spectacular on that day proofed him to be one of the greatest players to hit the hat-trick in the FIFA World Cup.

Source: Data.com
Gabriel Batistuta became the very first player ever to score hat-tricks at the FIFA World Cup successively.
The first hat-trick occurred in a game against Greece in 1994 then the second one came in the 1998 match against Jamaica, exactly in the next tournament 4 years later.

In doing so, he became the first and only footballer ever to score hat-tricks in back-to-back World Cups tournaments.

Gonzalo Higuain scored an unforgettable hat-trick helping the Argentina squad win an epic 4-1 game over the Republic of Korea in the 2010 FIFA World Cup.

As the century turned, the hat-trick rate in any World Cup tournament has decreased dramatically.

Higuain was the only football player to have fired three goals in the gameplay of that year’s FIFA World Cup.

This hat-trick made the Argentina player the last man to notch a treble in a World Cup final - until Thomas Muller did.

Source: Data.com
The 3rd-place playoff of the 1958 World Cup witnessed the thrilling fight between France and West Germany in Sweden.
The whole stadium reached a high peak when a French player named Just Fontaine marked the score with 4 spectacular goals.

At the 16th, 36th, 78th, and 89th minute, Fontaine kept the West Germany team in struggles when scored continuously 4 goals.

The France team then won the game with a final score of 6-3.

A hat-trick is sure a thrilling moment not only for the players but also for football history.

Since it can’t be planned in advance, anyone who scores a hat-trick in the FIFA World Cup will become legends.

Above is our list of the top 10 best FIFA World Cup hat-trick scorers, comment below if you want to add in some else's name!