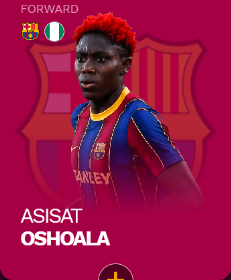 Barcelona's Nigeria international Asisat Oshoala is one of fifty players in the running to be named to the UEFA Team of the Year 2020 after the shortlist was revealed by Europe's football governing body UEFA on Tuesday morning.
Of the fifty players nominated, five are goalkeepers with fifteen each classed as defenders, midfielders and attackers.
Oshoala is competing with two of her Barcelona teammates, PSG, Lyon, Arsenal, Chelsea, Wolfsburg and Juventus players for one of the striking positions in the Team of the Year.
For the forwards, Barcelona have representation through Oshoala, Caroline Graham Hansen and Jenni Hermoso; Chelsea are represented by Pernille Harder and Beth England; Arsenal by Vivianne Miedema and Jill Roord.
There are  five French-based players nominated starting with Delphine Cascarino (Lyon), before Kadidiatou Diani (PSG), Marie-Antoinette Katoto (PSG), Eugenie Le Sommer and Nikita Parris (both Lyon), while Wolfsburg duo Ewa Pajor and Fridolina Rolfo, and Juventus' Cristiana Girelli complete the list of strikers nominated.
On Oshoala, UEFA wrote : "Powerful and sometimes unplayable forward with unerring eye for goal.

"Free-scoring in Barcelona's title win, either up front on own or partnered with Jenni Hermoso. Another UEFA Women's Champions League semi-final, a year after scoring in final."
The UEFA Team of the Year is chosen to reflect the votes of the fans in parallel with player's achievements over the course of the calender year, moderated by UEFA Technical Observer panel.
Igho Kingsley
Copyright ANS