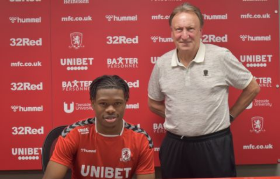 With a statement on their official website, Championship outfit Middlesbrough have confirmed that promising winger of Nigerian descent Sam Folarin has extended his contract with the club.
The 2000-born player has inked a new deal that will keep him at the Riverside Stadium until at least 2023.
Folarin has been rewarded for the progress he has made in recent weeks, having featured for the first team in the Championship and Carabao Cup while he was an unused substitute on three occasions.
He joined Middlesbrough in the summer of 2019 following a successful trial.
Speaking on the new deal, first team boss Neil Warnock said : "It’s progression from pre-season. He came to Cornwall and impressed me with his attitude and how he did.

"Training and playing with the pros has given him a massive lift, and he’s deserved it. He’ll be contributing to the team from now on".
A product of non-league club Tooting and Mitcham United FC, Folarin has appeared in four matches in the Premier League 2 in the 2020-2021 season and was in action for 248 minutes.
He won Middlesbrough's Goal of the Month award for February 2020 for his brilliant strike against Blackburn Rovers U23s.
Ifeanyi Emmanuel
Photo Credit : mfc.co.uk
Copyright ANS