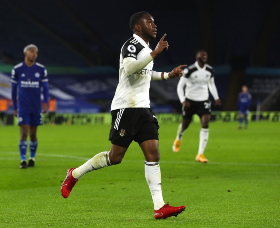 Two goals in the space of eight first half minutes eventually put paid to Leicester City as they suffered a shock 2-1 loss to Fulham in an English Premier League clash at the King Power Stadium on Monday evening.
For the Cottagers first goal scored by Ademola Lookman, the RB Leipzig loanee caught the Foxes at the back with a composed finish after finding himself in a one on one situation with goalkeeper Kasper Schmeichel.
Former Aston Villa stars Emile Heskey and Alan Curbishley who were on punditry duties for Premier League Productions revealed that Leicester City duo Dennis Praet and Wesley Fofana were caught out defensively in the build-up to the opening goal netted by Fulham, and lauded Lookman for his finish.
Heskey said : "Leicester couldn't break them down, they kept their blocks, three at the back there, sloppy ball in there and then he just drives.
"I would say Praet there didn't need to make that challenge. Lookman goes through and slotted it nicely."
Curbishley added : "Fofana needs to drop off and once he goes forward, it makes up the Fulham player's mind - it's to play Lookman in.
"That's a cool finish, when you are running in against the keeper you've got a long time to think about it and it's such an important goal for Fulham, a really good finish from Lookman."
Lookman has been involved in three goals (2 goals, 1 assist) in his last six games in the English Premier League.
Ifeanyi Emmanuel
Photo Credit : fulhamfc.com
Copyright ANS