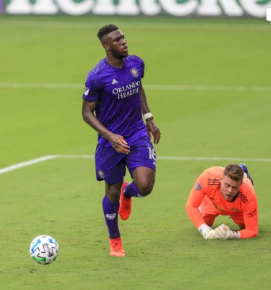 Nigeria-eligible strikers Daryl Dike and Ayo Akinola have received maiden call-ups to United States Men's National Team ahead of an international friendly against El Salvador in Ft. Lauderdale.
USMNT head coach  Gregg Berhalter has named a 22-player group for the friendly on December 9, with the two American-Nigerian youngsters among the six forwards invited.
Daryl, the younger brother of Nigeria international Bright Dike, was open to representing the Super Eagles but the United States Soccer Federation have taken the first steps to secure his services ahead of Nigeria.
Akinola has been part of United States age group sides in the past, earning caps for the U15s, U17s and U20s.
The 20-year-old has been on the radar of the Nigeria Football Federation but the three-time African champions did not follow up their interest.
Dike had a breakout campaign in 2020, recording eight goals with four assists in the regular season and was voted MLS Player of the Month in August, while Akinola tallied nine goals in 15 matches.
The two strikers won't be cap-tied to United States if given minutes against El Salvador because the match is only a friendly and is holding outside FIFA's calendar for international matches.
Ifeanyi Emmanuel
Photo Credit : instagram.com/daryld09
Copyright ANS