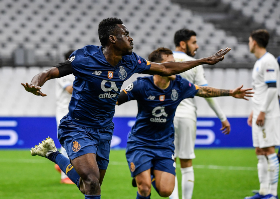 Porto coach Sérgio Conceição faced the cameras shortly after his side sailed through into the last sixteen of the UEFA Champions League with a game to spare following their goalless draw with Manchester City.
Conceição was delighted to see his side qualify for the knockout stages despite several players in the squad having little or no Champions League experience before the start of the group stage.
Nigeria international Zaidu Sanusi was namechecked among the Porto players without European experience.
Although the left-back impressed against Manchester City with the highlight of his performance being his clearance off the line to prevent Raheem Sterling from finding the net in the first half, he was lucky to escape a booking or even a red card for persistently kicking Phil Foden in the second half.
Speaking to UEFA's official website, Conceição said : "We achieved qualification with an impressive series of games on our part.
"We cannot forget to look at our XI and see Nanu, Zaidu, Manafá, Evanilson, Fábio Vieira...to see all these people with little experience in the Champions League and where they were a short time ago.
"There is a great organisation to my team; our goal was achieved on full merit."
Sanusi was named in the official Champions League Team of the Week on the back of his impressive performance against Marseille on game week four.
Igho Kingsley
Photo Credit : uefa.com
Copyright ANS