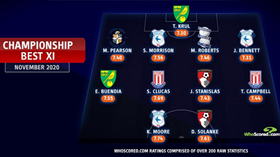 Chelsea Academy product Dominic Solanke has been included in the Championship Team of the Month for November 2020 powered by celebrated football statistics website Whoscored.com.
In November, Solanke, who joined Bournemouth from Liverpool in January 2019, helped the Cherries pick up three wins and one draw in five games in the Championship with three goals and two assists to his name.
In a 4-4-2 formation, the 2017 U20 World Cup winner is partnered in attack by Cardiff City's Kieffer Moore.
With a rating of 7.61, Solanke was the third best rated player last month, behind Stoke City midfielder Sam Lucas and Kieffer Moore.
On Solanke, Whoscored wrote : "Three of the five league goals Solanke has scored in the Championship this season came in November, with the former Liverpool man bagging a brace in Bournemouth's 4-2 win over Reading in the gameweek following the final international break of 2020.
"Solanke also bagged a second half equaliser at Rotherham over the weekend, with his three goals coming from 11 shots in total."
The 23-year-old Solanke has totaled 16 appearances in all competitions for Bournemouth in the current season and has been involved in 10 goals ( 5 goals, 5 assists).
Igho Kingsley
Copyright ANS