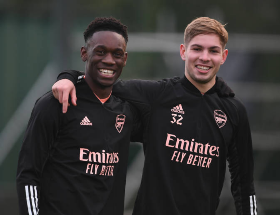 American-born striker of Nigerian parentage Folarin Balogun,19, is in contention to add to his first team appearances for Arsenal when they take on Rapid Vienna on matchday five of the UEFA Europa League on Thursday night, allnigeriasoccer.com reports.
The Gunners have published training pictures of the final workout held at London Colney on Wednesday and the England U20 international was part of the group.
Arsenal first team manager Mikel Arteta observed the promising attacker at close quarters with a view to his inclusion in the matchday squad.
Lest we forget, Balogun was on target thirty seven seconds after coming off the bench as Arsenal registered a 3-0 win over Molde last Thursday in his second  game as a professional.
He was left out of the Gunners squad against Derby County in the Premier League 2 the following day because he was serving a one-game ban following the red card he was shown vs Everton on November 20.
Goalkeeper Arthur Okonkwo, Ryan Alebiosu and Miguel Azeez have been registered by Arsenal for the Europa League but were not spotted in today's training pictures.
Arsenal are already certain of a round of 32 place thanks to their one hundred percent in Group B after four games.
Ifeanyi Emmanuel
Photo Credit : arsenal.com
Copyright ANS
All rights reserved. This material, and other digital content on this website, may not be reproduced, published, rewritten or redistributed in whole or in part without prior express written permission from allnigeriasoccer.com