...the complete Nigerian football portal
Subscribe
'I've Got To Be Open To Everything' - Mahrez-Like PSV Winger Not Ruling Out Nigeria Switch
Published: December 03, 2020 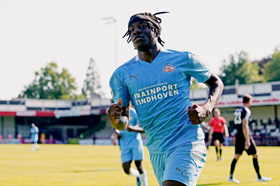 PSV Eindhoven wonderkid Nonso Madueke has refused to rule out switching allegiance to Nigeria where his father originally hails from.

The winger and attacking midfielder is provisionally cap-tied to England after representing the Young Lions at last year's European U17 Championship qualifiers, a squad that also contained charismatic Arsenal midfielder Miguel Azeez.

There is speculation linking the 18-year-old with the Nigeria set up with reports suggesting that the Nigerian Federation have assured him of an invitation to the Super Eagles straight away, subject to FIFA's approval should he decide to pledge his allegiance to the three-time African champions.

Madueke, who used to play for Tottenham Hotspur youth team before moving to the Netherlands, is having a breakout season with PSV with five goals and five assists to his name in 16 competitive matches.

On his international future, Madueke told The Sun UK : "I am only 18 so I have got to be open to everything. If I had a closed mindset I would not be where I am now so for sure I am open to both.

"We just have to see in the future what is best."

According to Youth expert Football Talent Scout, Madueke has a similar playing style to Manchester City's Riyad Mahrez and his main attributes are his pace, acceleration, dribbling, passing and ball control.