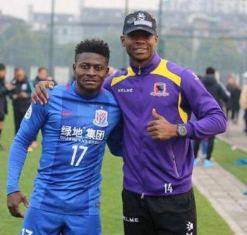 Allnigeriasoccer.com can exclusively report that speculation at home and abroad linking Leke James with an imminent move to four-time African champions Esperance is incorrect.
There has been intense speculation surrounding the future of the Nigerian striker because he has entered the last two months of his contract with Molde.
It was erroneously claimed that he had agreed a mouth-watering two-year deal with Esperance.
This website can report with certainty that Esperance have not directly contacted James and his intermediaries over a deal but many people had reached out to his camp from Tunisia.
Most importantly, the attacker has no plans to join Esperance even if they make an official approach.
This season, James has scored 13 goals from 26 matches in all competitions, including eight in European competitions.
A product of Bridge Boys, the 28-year-old lists Aalesund and Beijing Enterprises among his previous clubs.
Ifeanyi Emmanuel
Copyright ANS