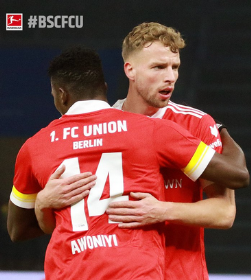 Liverpool-owned striker Taiwo Awoniyi continued his good run of form by netting a consolation goal for Union Berlin in their 3-1 loss to Hertha BSC at the Olympiastadion Berlin on Friday night, allnigeriasoccer.com reports.
The former Nigeria U23 international has either scored or provided an assist in each of his last three games in the German Bundesliga.
Awoniyi netted his first derby goal in the 20th minute when he directed a left-footed shot into the bottom corner.
Peter Pekarik's equaliser five minutes into the second half and a brace from substitute Krysztof Piatek saw Union Berlin lose for the first time in an away game this season and also ended their eight-match unbeaten run.
Since making a return to the German Bundesliga in the summer transfer window, Awoniyi has started half of the matches played by Union Berlin.
The 23-year-old opened his account for the season in a 2-1 win at Cologne on matchday eight, then provided an assist the following weekend against Eintracht Frankfurt.
The 2013 U17 World Cup winner lasted 54 minutes on the pitch vs Hertha BSC, for whom Jordan Torunarigha went the full ninety.
Igho Kingsley
Photo Credit : fc-union-berlin.de
Copyright ANS